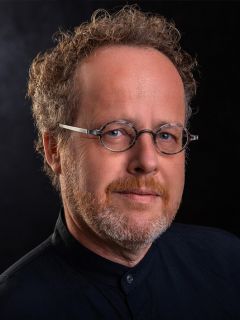 The Dutch conductor and composer Tjalling Wijnstra started his musical career as an accordionist. He studied at the Municipal Conservatory in Groningen with Egbert Spelde and then at the Royal Conservatory in Copenhagen with the Danish accordionist Mogens Ellegaard. During this period he performed and premiered many new chamber music works for accordion in combination with various other instruments and line-ups, with the important motivation to contribute to the emancipation of the accordion as a mature concert instrument.

In the nineties his career took a different turn and Tjalling Wijnstra started conducting. After studying orchestral conducting with successively Lucas Vis and Joop van Zon at the Sweelinck Conservatory in Amsterdam, he obtained his diploma in this with Roland Kieft. During his studies at the Nieuwe Opera Academy, he conducted the premiere of the opera Keesje by Jan Slothouwer.

For several years, Tjalling Wijnstra was associated with the Applied Drama program at the NHL in Leeuwarden as a guest lecturer, where he was musical director of the Mahagonny Songspiel by Kurt Weill, adapted for music theater by students of the program. From 2005 to 2011 he worked as Kapellmeister and choirmaster at Opera Zuid in Maastricht. During this period he assisted in all opera productions of Opera Zuid in collaboration with Het Brabants Orkest and the Limburgs Symfonie Orkest and also conducted performances by Don Giovanni by Mozart, Les Pêcheurs de perles and Carmen by Bizet, Die Lustige Witwe by Lehar, Il Barbiere di Siviglia by Rossini, Strawinsky's Mavra and Richard Strauss's Der Rosenkavalier.

In 2008 and 2009 he was conductor at the Zomeropera in Aldenbiezen, Belgium, where he played Der Fledermaus by Joh. Strauss and Tosca by Puccini conducted. In the spring of 2014 he conducted the premiere of the new street opera De IJsvorstin, composed by Peter Sijbenga with the Tryater theater company in Leeuwarden.

After he finished his work at Opera Zuid in 2011, he started to study a broader and different repertoire: on the one hand this resulted in studying and performing the oratorio repertoire and on the other hand in also focusing on composition. In 2015 he founded the Stichting Opera Company Noord, with which he produced the renewed premiere of the Frisian comic opera Keapmanskeunsten by Martinus Schuil and wants to bring (forgotten) compositions by Frisian composers to the attention again.

Since 2017 he has been conducting the productions of Opera Spanga, in recent years these have been La Traviata and Aida by Verdi, Pagliacci by Leoncavallo and Il Tabarro by Puccini. Since October 2019 he has been the artistic director and permanent conductor of the professional symphony orchestra Filharmonie Noord. In recent years he has performed several operas with this orchestra, including a series of operas by Verdi: Giovanna d'Arco, Macbeth, La Traviata, I Lombardi and Nabucco.

In addition to his work as a conductor, Tjalling Wijnstra is also active as a composer. He wrote the Rilke liederen for mezzo-soprano, choir and orchestra and was nominated for a 'golden owl' for his music for the serious game Underground. His latest work (Soms wurd ik wekker nachts, for choir and percussion) was written in the context of 75 years of freedom and will premiere in February 2020.

IN YOUR OWN LIVING ROOM
Due to success, the film can be seen until spring.