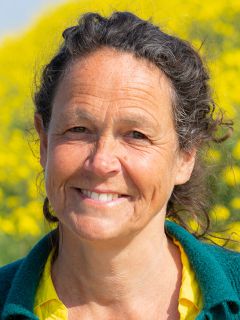 Corina van Eijk, artistic leader, director, producer and drama teacher finished her studies on the age of 21, on directing department of the drama school (Toneelacademie) in Maastricht, The Netherlands. After completing her studies she acted for a few seasons in the Dutch theater circuit and in the Irma Achten films Belle and Marie Antoinette is not Dead. She also did the casting for the cinema film Abeltje based on the book by Annie M.G. Schmidt (directed by Ben Sombogaard).

She taught acting to the voice students at the Utrecht Conservatory, where she directed her first opera, Der Schauspieldirector by Mozart. In addition she taught students at the Academy for Expression in Kampen and the Youth TheaterSchool of Friesland where she also directed her first film. For La Monnaie in Brussels and for the Aalto Theater in Essen she served as director’s assistant.

In 1989 Corina van Eijk founded Opera Spanga, the Verona of Weststellingwerf, staging the first opera, l’Elisir d’Amore by Donizetti. For the National Reisopera she directed The Pearl Fishers by Bizet in 1993 and La Forza del Destino by Verdi in 1995. In 1994 van Eijk directed Samson et Dalila by Saint-Saens in the Opera House of Nantes in France. The production in Nantes was acclaimed by the press but the audience scanned such texts as “All the Dutch are filthy!” and “Throw the director in the brig, even if she is a woman.” For the Dutch pop group Reboelje she staged the rock opera Gysbert, Gysbert in 2003. A year later she did When Samson Met Delilah, a co-production with Nine Circles Chamber Theater in New York, which was performed in both the US and in the Netherlands.

Van Eijk is responsible for two Dutch opera feature films: Rigoletto by Verdi (2003) and Samson and Delilah by Saint-Saens (2006). The latter was presented along with the new opera Gods Videotheek in the summer of 2007 in honor of the 15 year anniversary of Opera Spanga. In the fall of 2007 she made the children’s opera Mr. and Mrs. Macbeth, a co-production with the Production House Youth Concerts of the Concertgebouw. In the spring of 2009 she directed Offenbach’s Tales of Hoffmann for the Netherlands Opera Studio and in the summer of the same year Strauss' Elektra in Spanga.

In 2010 she directed the opera Carmen in Delfzijl under the auspices of the IVAK and in Spanga Is This Tosca?, a one-woman opera by Francis van Broekhuizen. In 2011 she collaborated with the group Rosa Ensemble in the production of Falstaff rivisto. In the summer of 2012 Opera Spanga performed the new opera Stuyvesant Zero by Caroline Ansink and Jonathan Levi, and produced a new opera film, Donna Giovanna. In the early Spring of 2013 she was in charge of the artistic coördination, adaptation and direction of the music-theatre performances of Macbeth for Fontys Hogeschool Tilburg, an interdisciplinairy project of 4 academies. In the summer of 2013 she worked on the multimedial music-theatre production Romeo&Julia, pardise is under your mother’s feet, a collaboration with the Frisian Youth Brass Orchestra, of which The Theaterkrant wrote: "top 3 best productions of 2013" and listed by the Groene Amsterdammer as "One of the best productions of last season").

In the summer of 2014 Puccini’s Gianni Schicchi, Opera Spanga’s fourth opera film, was premiered to huge acclaim and was shown with a live orchestra (Sinfonia Rotterdam, conducted by Conrad van Alphen) during Opera Spanga’s 25th jubilee. Well into 2015, the opera film with live orchestra was shown in cities all over the Netherlands. For NedPhoGO she directed Monique Krüs’ opera Anne&Zef, (repreased in 2016 and performed in the Spring of 2017 in Amsterdam in the new Holocaust Museum, with more staged productions being discussed for 2019 in the UK and other countries). As part of the 2015 Oranjewoud Festival her production of The Electric Flute, based on Mozart’s Die Zauberflöte by Floris van Bergeijk and Jonathan Levi, had its world premiere. Also in 2015 she wrote and directed the music- theatre production Het Mislukte Debuut, as part of the education project MuzykFirus.

In 2016 she produced and directed Verdi’s masterpiece Macbeth for Opera Spanga. In March 2017 a reprise took place of the opera Anne&Zef van De Bont and Krüs. In 2017 she produced and directed La Traviata for Opera Spanga and worked with students of MCast (School for Creative Industry, Malta) and D’Drive (higher education for the Creative Industries Leeuwarden, The Netherlands) on the production designs for the opera Aida as part of the European Capitals of Culture 2018, Valletta and Leeuwarden-Fryslân. In the fall of 2017 she taught at the Dutch National Opera Academy and directed the film parts of Aida in Malta with students of Mcast, guided by the artistic team of Opera Spanga.

In 2004 she received the Frisian Carnation award for her total oeuvre and in 2006 she was awarded the royal distinction of Knight in the Order of Orange Nassau.